"Every day I talk over the telescreen with people
in Melbourne and Durban and Washington.
The whole thing is a miracle of co-ordination." 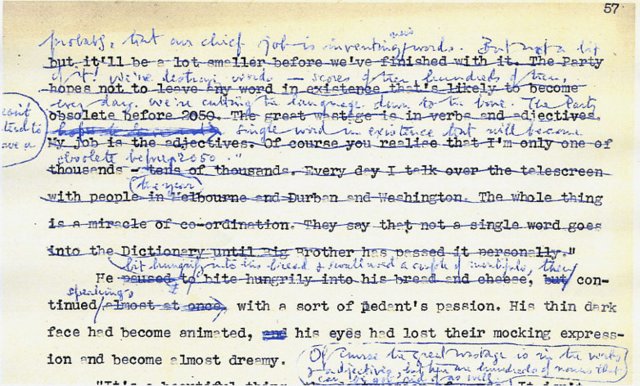 In an earlier draft of 1984  Orwell described the Internet (talking to people all over the world on the telescreen, ie like our computer screen) but for some reason he later scratched it out and the passage didn't make it into the finished book.

I was amazed when I discovered this fact when reading ORWELL'S MANUSCRIPT OF 1984 which is photo-copied in the fabulous book THE FACSIMILE OF THE EXTANT MANUSCRIPT OF NINETEEN EIGHTY-FOUR transcribed by Peter Davison which I bought last summer [2003] in Hay-on-Wye booktown in Wales during my HOMAGE TO ORWELL. 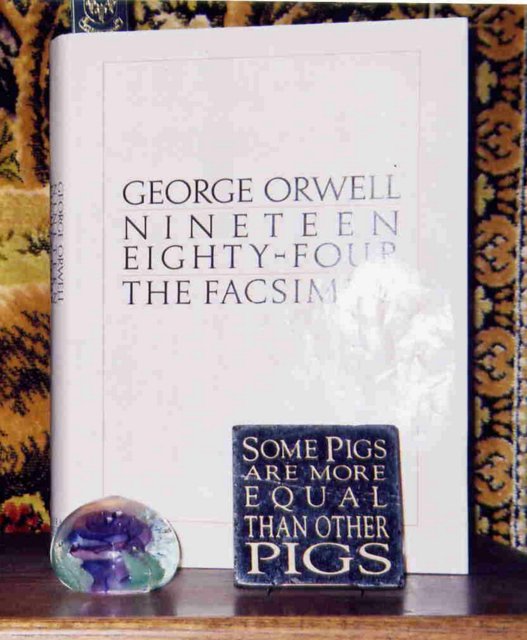 Here's the pertinent passage from page 57 of the manuscript of 1984  wherein Syme is explaining his Newspeak job to Winston (located in London, England) and he mentions "talking on the telescreen" to places all over the world (ie Australia, South Africa, United States):

"...but it'll be a lot smaller before we've finished with it. The Party hopes not to leave any word in existence that's likely to become obsolete before 2050. The great wastage is in verbs and adjectives. My job is the adjectives. Of course you realize that I'm only one of thousands - tens of thousands. Every day I talk over the telescreen with people in Melbourne and Durban and Washington. The whole thing is a miracle of co-ordination. They say that not a single word goes into the Dictionary until Big Brother has passed it personally.

He paused to bite hungrily into his bread and cheese but continued almost at once, with a sort of pedant's passion. His thin dark face had become animated, his eyes had lost their mocking expression and become almost dreamy. "It's a beautiful thing, the destruction of words. Of course the great wastage is in the verbs and adjectives, but there are hundreds of nouns that can be got rid of as well..."

The typed portion came from the second draft of 1984  which was typed by Orwell himself in August 1947. The scratch-outs and inserts in blue ink are Orwell's own handwriting done during the final edit on Jura in 1948. By that time he was very ill and was editing and writing the book in bed.

To see a reproduction of the above excerpt (for those who have trouble reading Orwell's writing) click below to see how Davison has transcribed it in page 74 of THE FACSIMILE:

To read the final version of that passage, as it appeared when 1984  was published in 1949, go to the book and notice that "talking on the telescreen to Melbourne and Durban and Washington" (which is comparable to communicating on the internet) is no longer there: 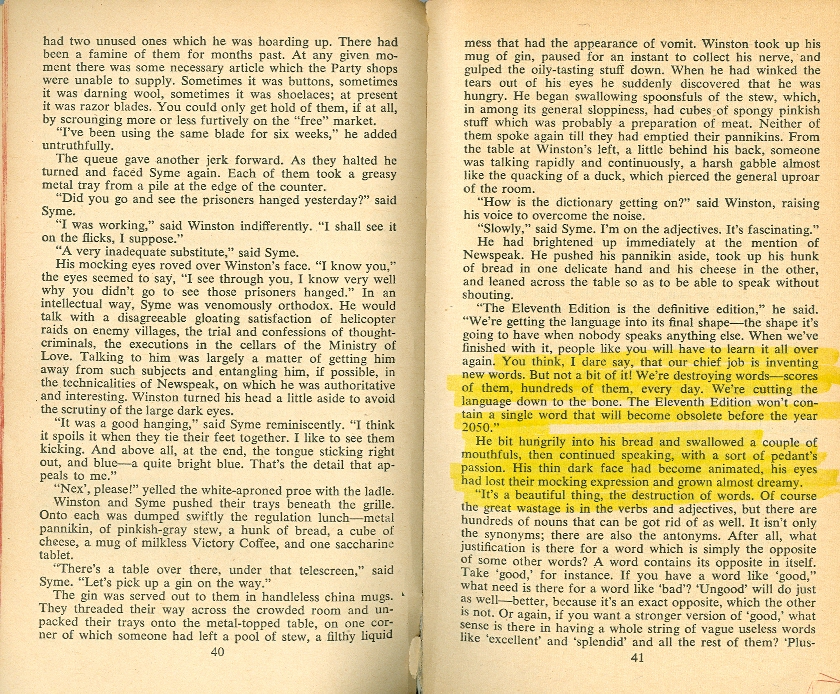 "...When we're finished with it, people like you will have to learn it all over again. You think, I dare say, that our chief job is inventing new words. But not a bit of it! We're destroying words -- scores of them, hundreds of them, every day. We're cutting the language down to the bone. The Eleventh Edition won't contain a single word that will become obsolete before the year 2050.

He bit hungrily into his bread and swallowed a couple of mouthfuls, then continued speaking, with a sort of pedant's passion. His thin dark face had become animated, his eyes had lost their mocking expression and grown almost dreamy. It's a beautiful thing, the destruction of words. Of course the great wastage is in the verbs and adjectives, but there are hundreds of nouns that can be got rid of as well..."

My thanks go to the reader who commented that "Orwell did not foresee the spread of information through such things as the Internet" because his email prompted me to bring the "talking on the telescreen" fact to the attention of Orwell Today readers, which proves that Orwell DID foresee the internet. ~ Jackie Jura

(talk on telescreen with Melbourne/Durban/Washington)

Obama holds Silicon Valley summit with tech tycoons, Washington Post, Feb 18, 2011
WOODSIDE, California -- President Obama traveled Thursday night to northern California for an evening meeting with a group of Silicon Valley chief executives, among them Mark Zuckerberg, the founder of Facebook, and Steve Jobs, the ailing head of Apple. The closed-door session with 12 technology leaders was held at the home of John Doerr, a partner at the major Silicon Valley venture capital firm Kleiner Perkins Caufield & Byers. Others in the room include Oracle founder and chief executive Larry Ellison, Netflix CEO Reed Hastings and Twitter CEO Dick Costolo. Although some in the business world have had an often-tense relationship with Obama, such as the U.S. Chamber of Commerce, the president has been popular in Silicon Valley. Obama attended a major fundraiser last October at the home of Google executive Marissa Mayer, and he met with Jobs on that same swing. Eric Schmidt, Google's executive chairman, campaigned for Obama in 2008 and has served as an informal adviser on economic issues since then. And Doerr, a longtime Democratic donor, has served on the president's Economic Recovery Advisory Board for the last two years. White House officials said Thursday night's meeting was mainly to discuss Obama's innovation initiatives. He has promised to fund tax credits for research and development; to reform the bogged-down patent system; and to blanket the country with high-speed wireless-Internet connections. Others attending the session were John Hennessy, the president of Stanford University; Carol Bartz, president and CEO, Yahoo!; John Chambers, CEO and chairman, Cisco Systems; Art Levinson, chairman and former CEO, Genentech; and Steve Westly, managing partner and founder, The Westly Group.

BILL GATES IS WATCHING YOU!

ORWELL'S MANUSCRIPT OF 1984 (The most thrilling part of VISITING ORWELL'S BARNHILL, where he wrote "1984", was being in the very room where he typed it, and where his wife Sonia later found the manuscript when she went to Jura in February 1950, a month after Orwell's death in London on January 21st...)