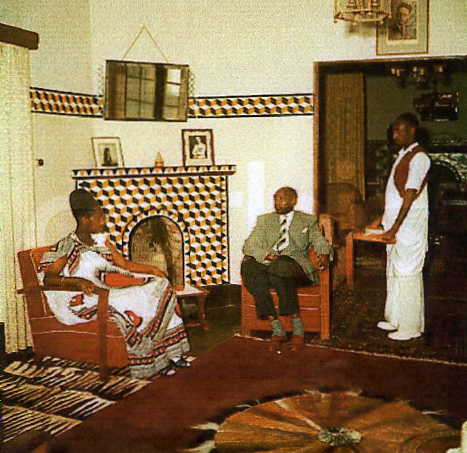 You are becoming the Rwandan Historian. This RWANDA LURED KAGAME HOME is a "MAGNIFICENT" posting and it came right on time. All this week in Rwanda they will be remembering the 1st week of October. It will be great that you are reminding them.

PS - I am sending pictures of QUEEN Rosalie and the KING

Thank you very much for the beautiful photos of Rwanda's Queen Rosalie who, in my research, I learned was the aunt of Paul Kagame, the sister of his mother, Asteria.

Queen Rosalie was the wife of the King who died in 1959. Here's an excerpt from PAUL KAGAME AND RWANDA by Colin Waugh, pages 230 & 8:

"...The Belgians continued the dismantling of the military power of the king and the aristocracy which the Germans had begun. The existing military structure was abolished and soldiers from the Congo were brought in to form the new Gendarmerie Nationale, the Rwandan police force. In 1931 Mwami Musinga was deposed by the Belgians and replaced, not by his hereditary successor and according to the Rwandan custom of abiru, but by colonial administrative selection, with support from the church rather than the chiefs and their aristocracy.

"A core motivation behind the colonists' decision was the slow rate of conversion to Catholicism among Tutsis which was occurring under Musinga. The new king, Mutara Rudahigwa, was much more pro-conversion and it was during his reign that the majority of Rwandans became Catholics.

"Nevertheless, the sidestepping of the monarchy and traditional constitutional provisions for the succession further undermined this central aspect of Rwandan life. The mwami was weakened as a symbol of power and unity in the country....

"...Paul Kagame's father, Deogratius, was born in Gitarama. Related to the royal family of Mutara Rudahigwa, he had enjoyed a close association with the king in his early career. A property and cattle owner, he led a comfortable life by Rwandan standards of the day. His wife, Asteria was very closely related to the queen and so the family had access to the benefits of a position in traditional Rwandan society. However, unlike most Tutsis of his position, Kagame's father was not a chief, not because he could not have become one but 'because he didn't like it himself,' Kagame recalled his father telling him in later years. In 1951, Deogratius went into business independently, distancing himself further from the traditional cattle-keeping and property-owning roles of an aristocrat of the day.

"He became involved in agricultural and other businesses and by the time the persecutions began, Kagame's father was a successful businessman still associated with but not dependent on the monarchy for his position in Rwandan society. As such, when the mood in the country turned violent beginning in 1959, he would have been targeted along with other leading Tutsis for arrest and harassment by the newly empowered Hutu-led administration...."[end quoting from 'Paul Kagame and Rwanda' by Waugh]

Recently I came across the heartbreaking story of Queen Rosalie's death during the genocide in a Human Rights Watch report:

"As in Kigali, where troops and militia launched the genocide while army officers and politicians were talking of 'restoring order', so in Butare soldiers launched the period of most extensive slaughter while the April 20 security meeting was taking place. At 11 a.m., just as the session was beginning at the auditorium in town, a detachment of soldiers commanded by Lt. (jg) Pierre Bizimana, acting under the orders of Capt. Nizeyimana, invaded the modest home of Rosalie Gicanda, a short distance up the main street in the northern part of town. Gicanda was the widow of Mutara Rudahigwa, the ruler of Rwanda who had died in 1959 just before the revolution that overthrew aristocratic Tutsi rule. About eighty years old, she lived a quiet life as a devout Catholic, sharing her home with her bed-ridden mother and several women and girls who cared for them both. Because she eschewed any involvement in politics and behaved with discreet dignity, even the most anti-Tutsi politicians had left her largely undisturbed throughout the thirty years of Hutu rule. When the killing began, she trusted that Prefect Habyalimana would look out for her. As his power waned, she began to receive threatening telephone calls. According to testimony, she called on Burgomaster Kanyabashi for protection, but he replied that he could do nothing for her. The soldiers passed through the wooded enclosure that protected the house from the main street and entered the little house with its air of faded respectability. They seized the former queen and six others, leaving her bed-ridden mother and one girl to care for her. The soldiers passed by the ESO and then took Gicanda and the others to a place behind the national museum where they shot them. One teenaged girl, left for dead, survived to recount the murders. The soldiers returned to pillage Gicanda's home in the afternoon and, two days later, they killed her mother. At the request of a priest, Kanyabashi sent prisoners to recover Gicanda's body and bury it in the yard next to her house.

"The news that this gracious lady and others from her household had been taken away by soldiers in the back of a pickup truck spread rapidly and alarmed Tutsi and all others who opposed the genocide. They concluded that if soldiers dared to seize even this revered person, then no one was safe. On the afternoon of April 20, physics professor Pierre-Claver Karenzi called colleagues to suggest trying to find a safe place for women and children, but knowing of the massacres elsewhere, others hesitated to bring Tutsi together into too large a group...."[end quoting from 'Human Rights Watch' report]