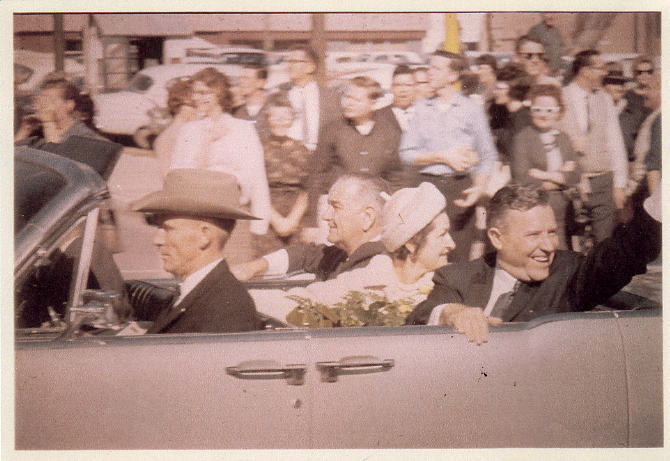 It was terribly dangerous to let your thoughts wander
when you were in any public place or within range of a telescreen.
The smallest thing could give you away --
a nervous tic, an unconscious look of anxiety...
anything that carried with it the suggestion of abnormality,
of having something to hide...
There was even a word for it in Newspeak: facecrime it was called.
Your worst enemy was your own nervous system.
Any moment the tension inside you was liable to translate itself
into some visible symptom.
~ Orwell, 1984

Please see the attached unpublished photo of LBJ in the motorcade. I bought it off eBay a few years ago.

Yes, that would be the LBJ "thousand-yard stare" I was talking about.

In my explanation -- excerpted below -- I used a diffent photo and I see now that I mistakenly thought the guy in the cowboy hat was LBJ. Now, after seeing your photo, I realize that wasn't LBJ but the driver (who had a 1,000-yard stare too but he had reason to be staring straight ahead).

...Notice how relaxed everyone else in the photo is -- Lady Bird and Senator Yarborough are smiling and looking toward the waving friendly crowd. But look at LBJ -- he's sitting stiff as a board and staring straight ahead like he's steeling himself for something he knows is coming. War vets recognize this look as "the thousand yard stare" worn by soldiers expecting to be hit any moment by enemy fire...

Now granted, LBJ wasn't himself in any danger of being a target that day in Dealey Plaza. But if he knew that JFK -- just a few yards ahead of him -- was a target, it would have probably been impossible to act naturally -- as evidenced in the photo above...

Since receiving your email I did a quick re-read of passages from the book JOHNNY WE HARDLY KNEW YE by JFK aides Kenny O'Donnell and Dave Powers who were in the convertible directly behind JFK and in front of LBJ's convertible when the shots were fired. Here they are describing the order of cars in the motorcade (I've inserted the photo I used and your photo at the pertninent passage):

"...When we were riding through Dallas on our way from the airport to the Trade Mart luncheon, I said to Dave, "There's certainly nothing wrong with this crowd". We could see no sign of hostility, not even cool unfriendliness, and the throngs of people jamming the streets and hanging out of windows were all smiling, waving, and shouting excitedly. The steady roar of their cheering was deafening. It was by far the greatest and the most emotionally happy crowd that we had ever seen in Texas. Sitting on the two jump seats of the Secret Service's backup car, only about ten feet behind the President and Jackie, we could see their faces clearly when they turned to nod and wave to the screaming people pushing into the street beside them. The President seemed thrilled and fascinated by the crowd's noisy excitement. I knew he had expected nothing like this wild welcome.

When we were making the sharp left turn around Dealey Plaza in front of the School Book Depository building, I asked Dave what time it was. Ahead of us in the back seat of the long Lincoln, the President was sitting on the right side of the car with his arm outstretched, waving to the crowd in front of the Book Depositary. Mrs Kennedy, in her pink suit with her matching pink pillbox hat perched on the back of her head, was beside him on his left and the red roses presented to her at the airport on the seat between them. Governor Connally was on the pull-out jump seat in front of the President and Mrs Connally was seated in front of Jackie. In our backup car, where Dave was sitting on the right jump seat, directly behind the President, with me on his left, there were eight Secret Service agents and enough high-powered firearms to start a Latin-American revolution. Four of the agents were standing on the running boards, two on each side of the car.

Behind us was the Vice-Presidential car, a four-door Lincoln convertible, with Johnson and Yarborough in the back seat with Mrs Johnson between them and Secret Service agent Rufus Youngblood sitting in the front beside the driver, a Texas state highway patrolman named Hurchel Jacks.

"It's just twelve thirty", Dave said, looking at his watch. "That's the time we're due to be at the Trade Mart". "Fine", I said. "It's only five minutes from here, so we're only running five minutes behind schedule"...

As mentioned in the LBJ OF ELMS ON ELM article it's my opinion that LBJ knew or suspected that JFK would be hit that day but he didn't have anything to do with the technicalities -- he was merely the obvious beneficiary.

DEALEY PLAZA DEALEY HATED JFK (...Lyndon Johnson 25 years previously had headed the youths who constructed the white concrete archway beside the picket fence behind which hid the gunman who fired the shot that killed JFK and made LBJ president...)