This is a magazine that is produced out of Yellowknife, NWT. It's ironic how this is one of the articles in the August/September 2016 issue of UP HERE, considering I have been spending a lot of time on the Bourassa family tree and this article is published. Funny how things work at times.

Enduring mysteries of the Northern skies
by Tim Edwards, from UP HERE magazine, the August/September 2016 issue

Johnny Bourassa was the child of famous mail carrier Louis Bourassa, who ran mail through the wilderness of Northern Alberta with such grit that King George V, in Buckingham Palace overseas, made him a member of the Order of the British Empire. Johnny was a war hero, honoured for his conduct as a WWII fighter pilot while carrying out operations against some of the most heavily defended cities in Germany, including Berlin itself. Johnny was a dog whisperer and family man, beloved in Peace River, Alberta, and he earned respect in the NWT when he swam out and rescued two anglers from the frigid waters of Great Slave Lake after a plane wreck in 1949. But on May 18, 1951, he was supposed to land in Yellowknife returning from Bathurst Inlet. And he didn't....

Hope all is well on your end and I hope you enjoy the article.

Thanks for sending the link to that article about Johnny Bourassa who is my uncle (brother of my mother, Florence) and your great-uncle (brother of your grandfather, Robert). In other words, my grandfather Louis (father of Johnny), is your great-grandfather. And yes, it is ironic (or godcidental) that the UP HERE article came out at this time, so soon after your discovering the Bourassa articles on my website and our working together on the Family Tree.

Reading the article I wondered about the incident of Johnny rescuing survivors from a 1949 plane-crash into Great Slave Lake. I looked through newspaper clippings my aunt (Johnny's sister, Bertha) gave me many years ago (some I've used in articles on the website, but others only in the memory album I made for the family) and found coverage of what must be it -- and Johnny wasn't the pilot, he was a passenger. Scanned below is the clipping:

Two Die as Aircraft Sinks on Take-Off: Three Others Escape
The News of the North, Yellowknife, September 1949

Two men were killed and three others had a narrow escape from death on Saturday when the Fairchild 71, piloted by one of them sank beneath the water of a small lake near Taltheilei Narrows. Dead are A.O. Finsand, Yellowknife and Edmonton, pilot of the aircraft and John Edward (Jack) Johnson, Yellowknife and Calgary. Badly shaken but alive are Johnny Bourassa, Peace River and Yellowknife; Kenneth Kimball, Yellowknife; Ray Carruthers, Yellowknife. The latter was admitted to hospital here with a badly cut cheek.

Aircraft was owned by Matt Berry. Finsand was out on Saturday morning to pick up a party employed by Jack McAvoy, found his party and was taking off when the accident occurred. Story learned this week was that right after take off the aircraft dropped to the water, rebounded in the air and hit the water again shearing off its pontoons the second time it struck. It sank immediately. Four of the men aboard are known to have escaped from the machine. They were Finsand, Bourassa, Kimball and Carruthers. No sign was seen of Johnson who is presumed to have gone down with the aircraft. Heavily clad the men had great difficulty in reaching the shore, Finsand failing to do so. He is said to have disappeared under the water about 20 feet from the shore.

No one was worried in Yellowknife when the craft failed to return on Saturday afternoon or evening, but anxiety was felt when there was no report from the party on Sunday. On Monday morning, pilot Doug Ireland found the survivors and brought back the tragic story. The body of Finsand was recovered on Wednesday and on Thursday RCMP and others were making every effort to refloat the shattered and sunken aircraft.

Since receiving your email with the article about Johnny I've come across some other excellent articles I previously hadn't read which cite my website, and others, as sources. For the benefit of ORWELL TODAY readers I've linked and scanned excerpts below.

PS - As I write this I just now noticed the significance of the date -- it's September 15, 2016 which is the date, 65 years ago -- on September 15, 1951 -- that rescuers arrived at Johnny's plane -- it having been discovered, the day before, by a B17 flying high overhead and seeing a glint of light down on Wholdaia Lake. It's another amaziing coincidence -- or, as I like to say, a "godcident".

Johnny Bourassa, son of Big Louis, by Town Spirit, Nov 6, 2014
If you have visited this blog before, you may have read the story of Big Louis, the intrepid mail carrier of the Peace Country. Big Louis was not the first, nor was he the last, legendary figure in his family. Today, the story of Johnny Bourassa, son of Big Louis. Flying Officer John Bourassa flew fifty two flights during two tours of duty in World War II. He was awarded the Distinguished Flying Cross, with a Bar, for his remarkable service and exceptional skills and leadership. The fate of a pilot in World War II was tragically predictable, yet Bourassa led his squadron through forty three missions without the loss of a single man.

In Peace time, Johnny came back to the Peace Country to work for Yellowknife Airways as a bush pilot. It was a job with its own brand of dangers, not to mention loneliness and cold conditions. Johnny, son of Louis, was well cut out for those kinds of hardship, however, having grown up with bush planes, dogsleds and long trudges in the snow. On May 18, 1951 Johnny refueled at Bathurst Inlet, then lifted off for Yellowknife. He was not seen again.... A search was launched along his flightpath, but no sign of Bourassa or his plane was to be found. Four months later, on September 14th, a piece of metal glinted in the sun. Johnny's airplane was found on the rocky shore of Wholdaia Lake, 350 miles southeast of Yellowknife. The aircraft was damaged very little considering its resting spot: obviously Johnny had landed with his usual skill....

The reason for Johnny Bourassa to be standing in front of this damaged Avro Anson is unknown, by Beth Wilkins, Peace River Museum, Sep 24, 2014
One thing is certain -- this type of plane, referred to as "Faithful Annie" or "Flying Greenhouse", filled several roles, including that of a crew trainer. It was probably in the latter role this aircraft had its mishap, not necessarily with Johnny at the controls. The Anson was docile, forgiving and easy to fly. Anson 11s were a familiar sight in the skies of southern Alberta during the Second World War. Perhaps its most distinct profile feature is its "duckbill" nose assembly, protruding well past the front windscreen.

Many of you know by now the outcome of the saga of Johnny Bourassa. But, you are not necessarily aware of the intricacies involved in its conclusion. As we delved further into the Bourassa story, we, not surprisingly, discovered there were those who cared very much for Johnny and his single-engine Bellanca (CF-EQP)... All the while, as we learned, Mary Bourassa and the Bourassa children, Myrna 10 and Jack 8, as well as other members of the Bourassa family, including Johnny's mother, Marie, worried, prayed and consoled one another by letter. You will recall the poignant note Mary received from Johnny's sister, Florence, from Ontario, offering encouragement regarding "Johnnie's resourcefulness". It is interesting that at a time such as this, letters and the words within were a comfort. One wonders how many comforting letters Johnny, his father Louis, and brothers Art and Ray had delivered during their Royal Mail carrying days. The search was terminated June 17, 1951, a month after Johnny and the Bellanca went missing and after 160,000 fruitless square miles of territory had been reconnoitered....

Louis Bourassa, by Town Spirit, July 10, 2014
Louis Bourassa had mail carrying in his blood. His father had been a mail carrier from Fort Dunvegan to Fort Chipewyan by dog team and canoe and Louis carried on the job with noteworthy devotion. He got to be quite famous... "Big Louie", born in 1888 and grown to a solid six feet tall, could speak English, French and Cree and tackle just about anything. He was the third generation in his family to work for the Hudson's Bay Company. In the summer he piloted the D.A. Thomas, successfully navigating the Vermilion Chutes that would later be the end of the magnificent paddle wheeler. 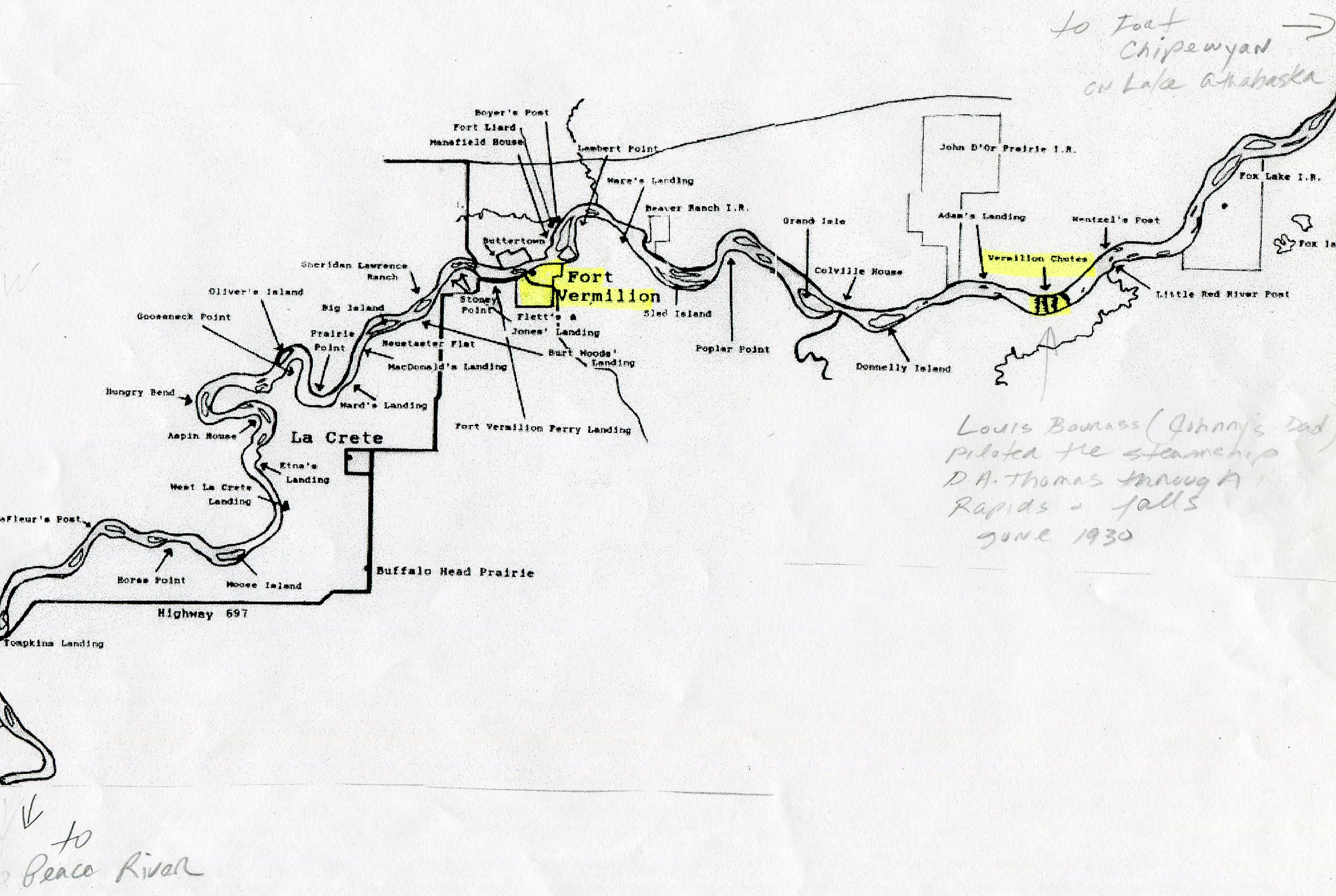 In the winter, he was a courier, carrying mail overland from Peace River to Fort Vermilion. Carrying the mail was by far the more hazardous of the two occupations. It was three hundred miles to the tiny trading post at Fort Vermilion. We all know how the ice and snow and just plain cold temperatures can drain the energy out of man or beast. It would be easy to get lost or disoriented, to get stuck in a gully or slip off the precipices the sheer sides of the Peace River banks. It would be easy to stop and freeze. Big Louie was a match for any turn of weather when it meant that isolated people could receive a long awaited letter from friends and family. His dedication was especially appreciated in 1918 during the flu epidemic when his mail bag held medicine as well as important news. In 24 years, Big Louie never missed getting the mail through. Bourassa's work did not go unnoticed. Not long before he died in 1935 his name was on the King's New Year's Honours List: Louis Bourassa was the recipient of the Order of the British Empire, signed by both King George V and the future King Edward the VIII....

D. A. Thomas, by Town Spirit, Feb 4, 2013
...From 1913 to 1916, Thomas invested a quarter of a million dollars on exploration and surveys. Certain he would discover vast deposits of either coal or oil (or both), in 1915 he spent $120,000 on a state of the art paddle wheeler with engines that could be converted between oil or coal and oil storage tanks to transport all the bounty. The D.A. Thomas was built to order by the Askew Company of Vancouver: 187' long, 37' beam, 300 ton cargo capacity, capable of carrying 300 passengers....

Searching for Johnny Bourassa (compilation of articles and photos)