FIGHTING FOR LIFE IN KIWI ELECTION

May I please use this image for a newspaper advertisement that I am putting together for Voice for Life -- Hutt Valley Branch in Wellington, New Zealand. 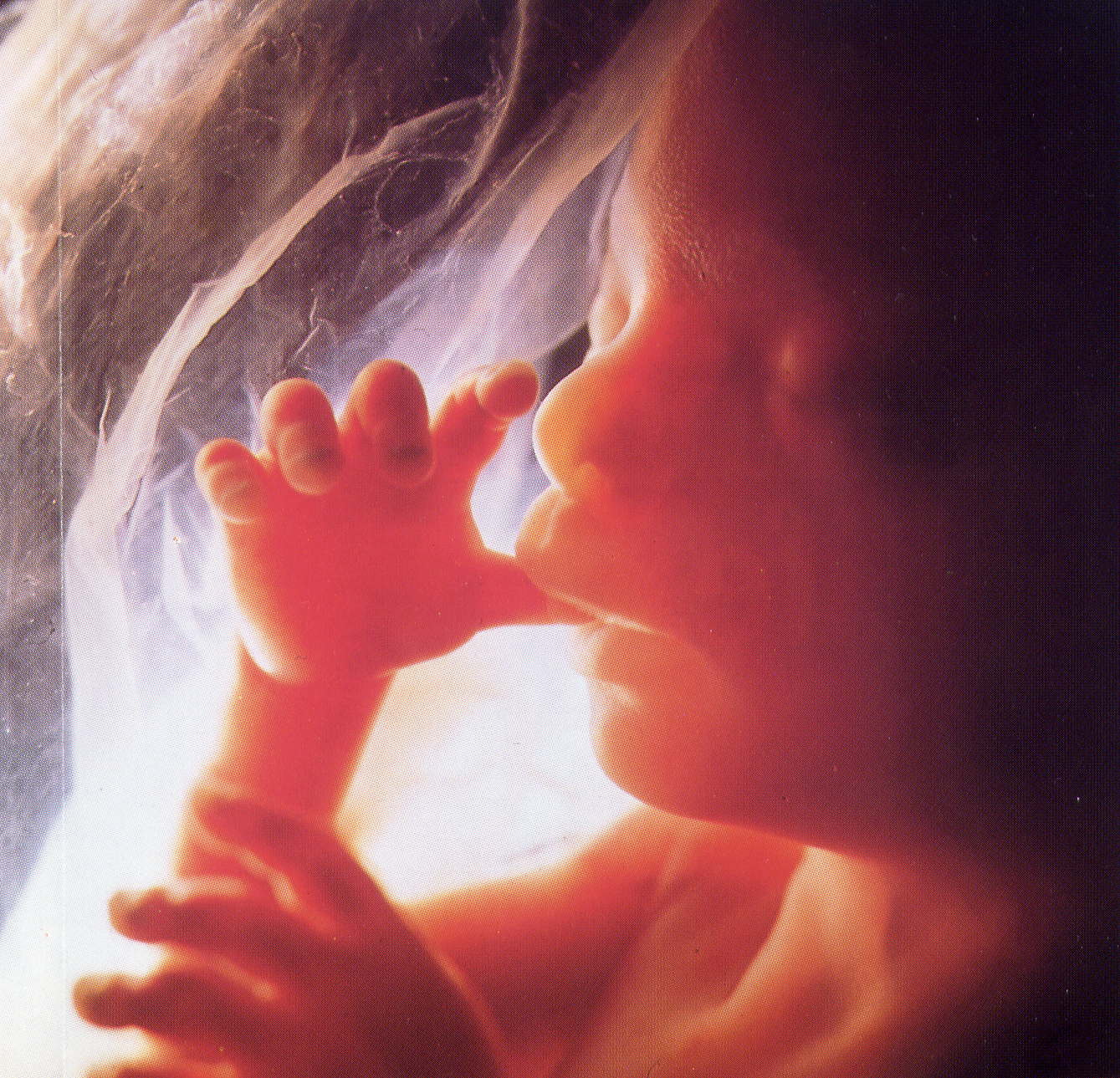 We plan to run the advert just before the general elections. The Greens want to have abortion legalised right up to full term. Of course we oppose this. Our advert is by the Hutt Valley Voice for Life and about 40 Ministers and their churches giving support to young or not so young pregnant women.

I hope to hear from you soon.

Yes, please do use that beautiful image of the unborn baby sucking its thumb. Many many readers over the years have asked to use it for pro-life projects they've been working on.

The so-called GREENS -- also known as WATERMELONS because they're GREEN ON THE OUTSIDE, RED ON THE INSIDE -- are/were the force behind the abortion-on-demand movement here in North America -- and throughout the entire world, for that matter.

Actually, Orwell warned about their Commie agenda in his book KEEP THE ASPIDISTRA FLYING published in 1936. He said that if Marxism or Leninism came into power there would be "free abortion clinics on all the corners".

Also in that book Orwell (through the main character Gordon Comstock) devotes several pages to the subject of abortion and the humanity of the unborn through its fetal development. I remember how amazed I was when I first read the book because it increased my love and admiration for Orwell even more. See ORWELL ASPIDISTRA AGAINST ABORTION

Speaking of Orwell, and New Zealand politics, I posted a YouTube of Winston Peters, the leader of the New Zealand First party, talking about Orwell and 1984 in a speech he made last year:

If I were a Kiwi living down under Down Under I'd be voting for Winston Peters for Prime Minister in the national election -- not just because his name is Winston, like Orwell's hero in 1984 -- but because I like everything he says -- he's a patriot and a man to make New Zealand proud.

I lived in Oz for a year back in the 70s -- that's as close as I got to New Zealand -- but I do follow what's going on in Oceania.

All the best in your voice for life work,
Jackie Jura

WHERE HAVE ALL OUR BABIES GONE?

Many thanks for granting us permission to use the image. And thanks also, for all the extra information. I quite agree with what you say about the greens. I have always said that the Greens are "commies" with a facelift. Interestingly, from a design point of view, the complementary colour of green is red.

Yours in Him by grace,
Walter Walraven

Pray for Winston to swallow Greens, by Garth George, NZHerald, Aug 20, 2014
If there is one thing about the election campaign that gives me the willies, it is the possibility that the Green Party will be part of the government that politicians patch together after the election next month. The very thought of the Greens getting anywhere near the real levers of power is, quite simply, intolerable.... They have grown and in Parliament occupy 14 seats; and, if their expatriate Australian co-leader, Russel Norman, is any indication, personality politics is no longer verboten. I've said it before and I say it again: The Greens are dangerous, and the more sinister planks of their policy are, to say the least, frightening to those of us who care about what really matters. They are dedicated to making our laws on abortion even more liberal so that any woman can demand an abortion for any reason. They strongly support making euthanasia legal; have all voted for same-sex marriage and favour same-sex adoption; and they endorse an education system which teaches that homosexuality is normal.

What that all means is that they are far more concerned with flora and fauna and fish than they are with human beings. They will fight to save whales and slugs and snails and geckoes and birds and native fish but when it comes to the sanctity of human life, particularly that of defenceless fetuses and the frail elderly, the Greens, in my view, have no interest at all. What should concern us just as much is that the Greens would have us all on bicycles or on our own two feet and would deprive us of much-needed improvements to our roading system. And they are proposing free this and free that to the tune of billions of dollars without any convincing details about where the money might come, save raising the top income tax rate to 40 per cent. Their tax-and-spend promises leave even Labour's in the shade.

So where do we look for help? The obvious, and best, answer is for us to give National sufficient votes to govern alone, but that's a slim possibility under our dreadful MMP system. So right now there is only one rescuer in sight - that venerable and masterful politician Winston Peters and his ragtag NZ First colleagues. Never mind his nationalistic bombast. I, too, have grave doubts about selling great swathes of our fabulous farmland to foreigners -- be they Chinese or American or any other race. And I'm not all that fussed about selling state assets as well. And the reaction to the odd so-called "racist" remark just goes to show how thin-skinned we have become. However, if Mr Peters and his team do nothing else between now and the election late next month, they must patch up the rift with John Key and National. And, even if he has to humble himself, Mr Key must do whatever it takes to bring Mr Peters into the fold. I certainly hope that only NZ First ends up with enough MPs to stand against any move by the Greens and Labour to advance their murderously liberal humanism. They should have the gratitude and the support of hundreds of thousands of New Zealanders who see the sanctity of life as the bedrock on which civilised society is built. A far-left government with no conception of the sanctity of life is the last thing this country needs. A last hurrah for Mr Peters is infinitely preferable to a first hurrah for the Greens.