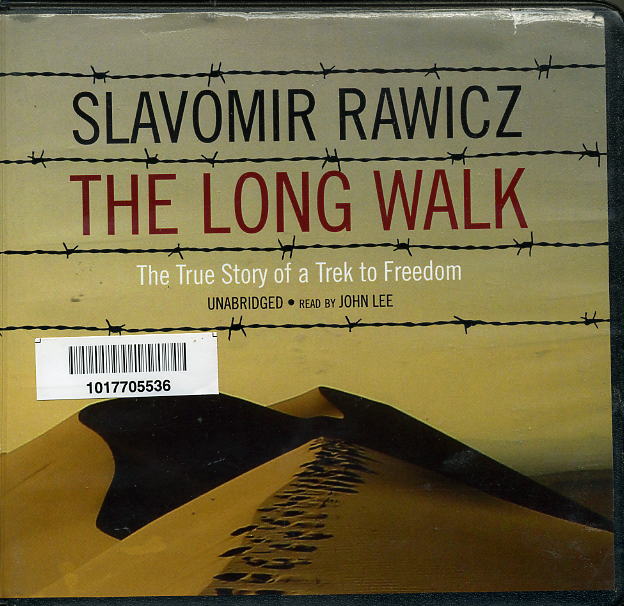 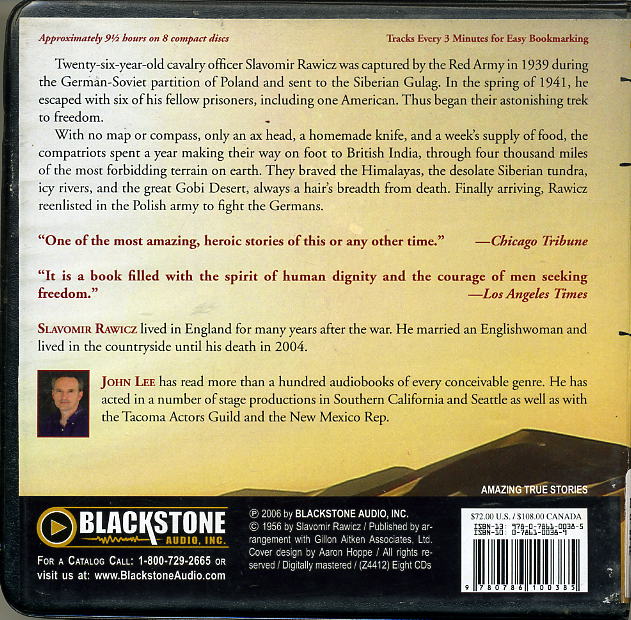 "Twenty-six-year-old cavalry officer Slavomir Rawicz was captured by the Red Army in 1939
during the German-Soviet partition of Poland and sent to the Siberian Gulag.
In the spring of 1941, he escaped with six of his fellow prisoners, including one American.
Thus began their astonishing trek to freedom..."

Over the Christmas holidays we went on a long road trip and, as usual, went to the library beforehand to stock-up on booktapes to listen to along the way.

While there I bumped into a friend who said she'd gone on a trip last year and listened to THE LONG WALK, a true story about a prisoner who escapes from the Soviet Gulag and walks all the way from Siberia to India. She knew, from my telling her about "1984" all these years, that Orwell had modelled much of it on Russia under Stalin, and was sure I'd enjoy it.

I said it sounded like perfect listening material for THE LONG DRIVE through slippery, snowy Canadian mountains and frozen, windblown prairie. We'd be warm and cozy in the car, but during the ten-hour drive we'd be just inches away from Siberia-like conditions, and easily able to imagine ourselves in the same situation (or at least greatly empathize).

It wasn't on the shelf at that branch, but the computer showed a copy available at the main library and - to make a long story short - no sooner were we on the outskirts of town the following day than it was popped into the machine and kept us transfixed through 8 CDs and 800 kilometers.

It's been my observation that the vast majority of Canadians, Americans, Brits and Australians know almost nothing about Stalin and Mao and their Russian Gulags and Chinese Laogais. Listening to THE LONG WALK will give some insight into what it was like for innocent people to be denounced, arrested, imprisoned, interrogated, tortured, tried, convicted and then transported to slave labour camps in Siberia. ~ Jackie Jura

SELLING ROPE TO HANG US

MY JOURNEY THROUGH FAMINE STRICKEN RUSSIA, 1933

NO ESCAPE FOR GULAG PRISONERS

STALIN: KOBA THE DREAD I